I. The Rise of the Church and its activity.

While speaking about the birth of the church, it is important to stress that it was not influenced by baptist missionaries. It was the result of God‘s grace working in people. The railwayman Schneider came from Virbalis to Kaunas in 1876. He was a man of faith and he belonged to the baptist church of Eitkunai town.

While working, Brother Schneider tried to witness about his Lord. There was a group of 12 people, who believed in God and were baptized. These people were members of Eitkunai church. The cobbler Maciulaitis helped Schneider in the church.

Another brother Stoltenhoff from Warsaw came to Kaunas with his family in 1886. He was hard-working man and helped local believers, preaching the Word of God in the church, working at Sunday school and working with youth, he also conducted the church choir. The number of believers started to grow.

Kaunas branch of Eitkunai church had 75 members in 1888. However, some difficulties arose as Eitkunai were located in the territory which belonged to Germany. Therefore, Kaunas branch started to act as a separate and autonomous church on 12th of February, 1889 (according to the old calendar).

The church was conducted by Brother Stoltenhoff, who was the director of the factory of Brother Schmidts (later it was turned into the factory “Metal“). The preacher Marx was invited for spiritual work. He served in the church for three years. When he left, Stoltenhoff again started to conduct the church.

Otto Lenz was talented and dedicated man. The number of the church members reached 400 due to his preaching. After 12 blessed years, Otto Lenz left Kaunas. For awhile local brothers served God alone.

Later Brother Ballah came, he served in the church till 1st World War. Germans comprised the majority of the church members. But soon people of other nationalities started to believe in Jesus and joined the church. The latter ones conducted the service in Russian, but besides Russian believers, there were Lithuanian believers, who were not conscious yet. There were used only Russian and Polish languages in Kaunas and its surroundings at that time.

When the war started in 1914, the part of believers dispersed. After the war in 1918 brothers and sisters started to return from the utmost ends of Russia. Brothers Gustav Freidank and Heinrich Hoffmann worked much at that time. The first one spoke four languages very well: German, Lithuanian, Russian and Polish. Thanks to his help after the war Lithuanian language was started to be used at service time.

Gustav Freutel, born and grown-up in Kaunas, started to conduct Kaunas church since 1921. He served in the church till 1935.

Lithuanian believers established a separate communion on 23rd of April, 1933, so that they could spread the Word of God among their fellow country men more widely and independently. It was conducted by Teodor Gerik.

The communion of Kaunas Evangelical Christian Baptists speaking Russian was established in 1934 by Valter Schweizer. He was the pastor till 1940.

The Soviet Union occupied the Baltic states in 1940. Therefore, the majority of German believers moved to Germany and other countries.

Brother Schweizer together with his wife returned to Kaunas in spring of 1943 and again started to conduct communions of Russian and German believers, also Lithuanians who joined them, as their communion was dispersed due to events happening.

W. Schweizer was the pastor till 2nd of July, 1944, Sunday. At that memorable Sunday 10 new believers were baptized: five Germans and five Russians, among them a blind soldier was baptized. A festive service was held in the church in Sanciai. There participated many believers from various Lithuanian cities, all were singing psalms to God’s glory in German, Lithuanian and Russian languages. However, at that time nobody knew that after three days they will have to leave Lithuania due to coming front line…

When Soviet army returned to Lithuania in 1944, the church was taken away. The building was used to accommodate Russian soldiers, later the church was used as a club, and then – as a salt warehouse.

After the war, a small group of believers which stayed in Kaunas gathered to worship the Lord in the flats of the sisters Magdalena Šablinskienė and Elena Gudzinskienė. A preacher brother Sinelshchikov preached the Word of God in the communion at that time.

Believers had to face many diffculties and persecutions initiated by Communist government which governed the country at that time.

After the death of the brother Sinelshchikov, believers had not had a pastor for a very long time, only sisters were left. Then God loving sister Efrosinija Prokofjeva took the initiative. She uplifted sisters‘ souls when they had troubles, encouraged to pray. Thanks to her encouragement, sisters gathered together to read the Holy Scripture.

Guests often visited the communion of believers: Jonas Inkenas from Klaipeda, brothers and sisters from Vilnius church and other cities of Lithuania. They refreshed by means of the Word of God and encouraged believers.

A young family of believers from Lvov (Ukraine) – Vladimir and Nadija Sereda – came to Kaunas on March of 1980. They soon joined the communion of believers and V.Sereda was chosen as a leader of the group quite soon.

Kaunas city Council of Folk Deputies provided a warrant on 20th of December, 1988. This warrant enabled to use the building where the church previously was. The church was returned to the communion on 11th of November, 1990. At that time the building was just a desolated warehouse without the roof, where salt had been kept for 20 years. It required a total repair, much money and effort to rebuild the church.

Trusting in the Lord God and encouraging believers, pastor V.Sereda together with a small group of God’s children started repair works.

All the churches of Lithuanian Baptist Union helped financially, and others worked in the church while rebuilding it.

With God‘s and believers‘ help a solemn opening and dedication of the church took place in 27th of July, 1991. On that day the doors of one more church were opened for souls looking for God.

1991-1995 were the year of spiritual awakening in Lithuania, when people being unsatisfied with religiosity, searched for God‘s nearness, His living Word and true freedom. Many people repented and asked Jesus Christ to come into their lives and hearts. Among those who accepted Jesus there were many soldiers of Soviet army with their families, who joined the communion, although later with the army and God in their hearts they removed to Russia.

III. The communion at the beginning of 21st century

During that period the communion had good moments as well as difficult periods, there were periods of spiritual rebirth and estrangement. The days of persecution and the days of silence and peace changed each other. God was always loyal and listened to the prayers of those who called Him, because He is merciful and loving God.

During the last decade (1991 – 2001) the communion organised several evangelical events, spiritual concerts in the city halls, schools and in the tent (Nemunas island), many seminars, conferences, camps for children, youth and adults.

Brotherly relationship was established with Swedish and German churches. They sent humanitarian aid not once, it was distributed to the poor, to the schools, kindergartens, various relief organisations. Shipment of medicine was given to hospitals.

The baptist communion has organised and has led meetings and services in Alytus control unit colony prison since 1994, it joined international organisation “Ministry for prisoners“ in 1st penitentiary of Pravieniškės in 2003. Those who have returned from prison are provided with spiritual and material aid, they are helped to integrate and live full-rate public life.

The communion is one of the founders of  Lithuanian Christian Charity and Mercy Fund “SAMARIJA“ and has participated in it since 1996. The aim of this fund is to support and provide spiritual and material aid for people, addicted to chronic alcoholism and drug habit, orphans, children left without parents‘ care and to welfare recipients in Lithuania.

The communion participates in the programme “Give hope to children“. This programme cares of and supports children providing them material aid, joy and hope.

The comunion also participates in the activity of Christian organisation “Samaritan purse“ in Kaunas and its surroundings, telling the Good News, distributing presents for children from families who are welfare recipients.

The members of the communion together with the organisation “Gideon brothers“ distributes the Holy Scripture in schools, hotels, prisons, military divisions, cities and villages.

The believers of the church actively take part in the seminars, conferences, summer camps for youth and children and other events abroad and in Lithuania which are organised by the Union of Lithuanian Evangelical Baptist Churches.

Nowadays service in the church is done in Russian and Lithuanian. There are also Sunday school and library of Christian literature.

The youth of the church gathers to study the Holy Scripture, spend time together cheerfully and to improve spiritually so that with God‘s help they could choose the right direction in life.

Our past is in God‘s hand. Now going to the next page of history we give our future to the Almighty God.

We continue traditions of our brothers and sisters, because the Holy Scripture, tolerance, conscience and freedom for baptists are the foundations of belief and life. The Greek word „baptizo“ means „to immerse“, and baptists are those who are baptized. Baptists got such a name, as they confess baptism – immersion of the adult person who believes in Jesus.

We thank God that after more than 140 years, the fire lighted up by the Holy Spirit still burns. 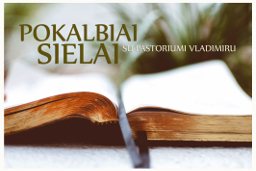